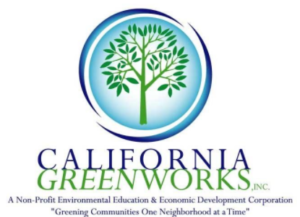 Expanding Community Sustainability highlights the work and ideas of four diverse Los Angeles thought leaders. They will present and explain their definitions of sustainability and the future of “green” justice in our neighborhoods. In presenting these dialogues, California Greenworks seeks to inspire all to advocate a sustainable future, better understand best green practices for diverse communities, and foster community resiliency for our children, grandchildren, and future generations. Each evening will kick-off at 6:30 PM at the Community Room of the Crenshaw Baldwin Hills Plaza, 3650 W Martin Luther King Jr Boulevard, Los Angeles, California 90008, and is free and open to the public. Speakers include;

LOS ANGELES, CA – Assembly Member Autumn Burke will be honored with the Environmental Pioneer Award for her work to protect California’s natural resources. Ms. Burke has led the charge to help protect California’s air and introduce measures to reduce climate change for all Californians. “As an African American led nonprofit, we want to come together and honor her as the first honoree of this award, which recognizes women in the environment who are making an impact to protect and conserve our natural resources,” says Mike Meador, Founder/CEO of California Greenworks.

In 2017, Autumn. R. Burke introduced a landmark bill to End Child Poverty in California and has made expanding 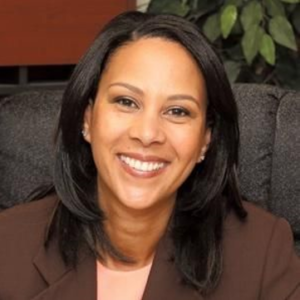 health care access and economic opportunity the centerpiece of her legislative career. During her first term, she became well- known as a champion for reproductive rights, environmental justice and health care. Burke authored bills that established Transformative Climate Communities to help struggling neighborhoods, ease access to maternal health care, and create more accountability and transparency across government levels. Burke has also secured $900 million in funding for career technical education programs and advocated for new investments in affordable housing and transportation infrastructure. She has authored AB 151 which would strengthen California’s ‘Cap and Trade’ program to continue reducing greenhouse gas emissions that significantly contribute to global warming and climate change. Burke is a member of the Legislative Black Caucus, Legislative Environmental Caucus, and the Legislative Women’s Caucus.  She represents the cities of Inglewood, Hawthorne, Lawndale, El Segundo, and Gardena, the Los Angeles neighborhoods of Westchester, Playa del Rey, Playa Vista, Venice, and Del Rey, and the communities of Del Aire, West Athens, Lennox, Westmont, and Marina del Rey. 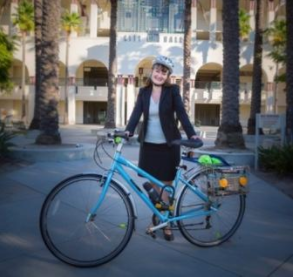 Meghan Sahli-Wells, Culver City Council member and former major has championed initiatives to improve the lives of children, and has led efforts to address climate change, active transportation, affordable housing, homeless services, government transparency, and health and environmental impacts of oil drilling. She is the Chair of the Council’s Sustainability Sub-Committee, and serves on the City Council/School Board Liaison Committee and Oil Drilling Sub-Committee. In addition to her City Council duties, she is on the national board of Local Progress. At the same time, she’s a Board Director of the Westside Cities Council of Governments and the Southern California Association of Governments (SCAG), the nation’s largest metropolitan planning association. She also served on the Board of Directors of the highly successful Metro Expo Line Construction Authority during the build-out between Culver City and Santa Monica. Prior to being elected to the City Council in 2012, Sahli-Wells led many community initiatives and held multiple community leadership roles. Notably, she co-founded what is now known as Bike Culver City and Transition Culver City, part of the international Transition Network.

The mission of California Greenworks is to provide environmental programs to urban schools, revitalize urban open space, and advocate for green economic development.  California Greenworks is a non-profit organization chartered to promote environmental protection to urban watersheds, community revitalization, and economic development throughout southern California urban communities. The organization’s motto, “Greening Communities one Neighborhood at a Time,” reflects their efforts to help grow environmental outreach and educational programs that improve the quality of life in urban communities.

For more information on the event, or for press wishing to cover it, contact: Mike Meador
mmeador@californiagreenworks.org 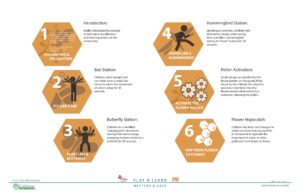 Let’s Play ‘N Learn is our newest project that we received a challenge grant from the Kaboom Foundation to develop play space in unusual places. Our project is located at 1782 W. Gage Ave, Los Angeles, CA 90047 “Let’s Play N Learn” will transform a bus and metro stop into a playful area complete with interactive exhibits to encourage learning and active play. Kids will be able to follow colorful shapes and images to jump and skip according to the ground prompts. California Greenworks, a non-profit that works to educate communities on environmental protection and conservation, hopes that more than 500 kids in the surrounding community will play and learn at the same time. 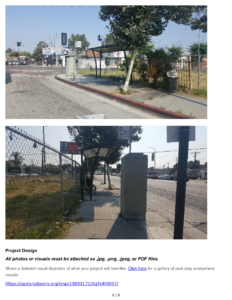